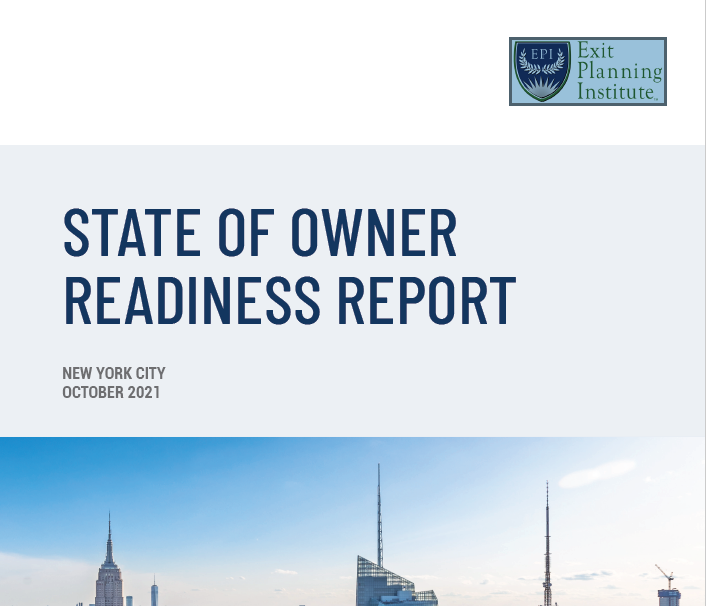 Since 2013, the Exit Planning Institute (EPI) has been conducting a series of surveys entitled “The State of Owner Readiness”. These reports have been conducted multiple times a year in different geographic regions in the US. Thanks to the pandemic, there was no survey conducted in 2020, but the survey was recently conducted in New York City with the latest report being released in October 2021. In this article, we summarize the most salient features of the report. A more detailed deep dive video will follow that will go into greater detail on the specifics found within the report.

Since the original survey was conducted in 2013, the composition of owners that have participated in the surveys has been mostly consistent. The key attributes have been:

The majority of respondents in this survey were Gen-X owners of businesses ranging from (US)$5 million to (US)$100 million. This could reflect the general larger size of business in the NYC area, but it also may reflect that many of these businesses have already transferred from their original founding owners to second or third generation ownership. This is also consistent with the larger size of the companies, perhaps reflecting many years of growth under multiple generations of owners. This trend was consistent amongst both family-owned and non-family-owned businesses.

When asked when they planned to transition their business, the largest response was in three to five years. This differed from previous surveys where the common time frame for exit was up to ten years. This could be reflective of owners generally being younger and of a different mindset than Baby Boomer owners. In other words, Gen X owners tended to be more aligned with exit planning compared to Baby Boomers who tended to want to hold on in some cases “as long as possible”. This is also noteworthy as this also implies that many owners will exit their business in their 50s, indicating either an early retirement, or more likely, owners who will have some involvement in either the transitioned business or another business altogether. This is quite different from the situation with Baby Boomers who will most likely be seeking out some type of retirement after their exit.

A positive indicator from the survey was that almost 90% of respondents felt they were above average in their readiness to transition. That is significantly higher than found in other surveys. This may be reflective of the younger demographics along with better education amongst owners about exit planning. The survey indicated that a large majority had undergone formal education about the exit planning process and had also undertaken committing their plans to writing while assembling a transition team.

The survey investigated, for those owners who had created one, what their transition plans included. The top three answers were:

A key to managing the exit planning process is addressing the “three legs of the stool”: specifically financial readiness, personal readiness, and business readiness. Personal financial plans are important because they indicate what an owner needs to retire comfortably according to their standards. This needs to be correlated with a formal valuation of their business since for many owners, 80-90% of their wealth is tied up here, thus the two are intrinsically linked. Written goals and objectives are important for owners with time horizons to exit beyond a year. Goals and objectives can be both business-oriented and of a personal nature. Owners need to revisit their roadmap to exit to ensure they are adequately addressing all the steps necessary to maximize the value of their business and ensure their transition is smooth. Contingency plans are important because all owners need to be aware of the 5Ds: death. disability, distress, divorce, and dispute. Any of these items can cause an owner to unexpectedly exit the business or have the business prematurely be liquidated if a contingency plan is not in place, which should include adequate and proper insurance.

Items that scored low in the survey were:

The tax plan is somewhat surprising in that many owners need to consider tax implications of the sale including the corporate structure, whether the exit transaction will be an asset versus share sale, and personal tax matters that can be material in dollar value if not properly planned on a timely basis. It is highly recommended that such tax planning take place a minimum or two years before any potential transition due to Canadian tax rules about restructuring. However, ideally this planning should start even earlier if possible.

For similar reasons, estate planning should be addressed upfront by owners due to the potential of an involuntary exit thanks to one of the 5Ds occurring to an owner, business partner, or another shareholder. As part of this process, a review of the buy-sell agreement between shareholders should be done to ensure it is up-to-date and has considered all relevant options.

Unlike previous surveys where external exit options dominated, owners in this survey strongly preferred internal exit options such as MBOs, family transitions, or ESOPs. This may be a factor of businesses that are run by second and third generation owners where each of those internal options might be preferable to both ownership and management. Internal exit options can be preferred when culture and core values are more important than simply maximizing exit proceeds. Internal options usually also likely require a phased exit on the part of current ownership since the next generation may not always have the available funds to make a full buy-out of the previous generation.

In previous surveys, many plans had failed to incorporate a business valuation and value enhancement considerations. In the NYC survey, over half the respondents had obtained a formal business valuation while almost 70% had incorporated value enhancement considerations into their plans. This is encouraging since many owners have typically relied on their own perceptions of what their “sweat equity” is worth. Too often owners rely on what is referred to as the “country club” valuation. That is, the valuation multiple a colleague or peer achieved for their business without any additional information on why such a multiple may have been appropriate for the specific company but of no significance to another business that has different attributes. It is only through a true formal valuation that one can gain insights into the drivers of the business value, which then can be used to create a value enhancement plan as part of a holistic exit planning engagement. It is noteworthy that AM&AA estimates that 95% of deals fall apart due to owner’s overestimating the value of their business.

Adopting a value creation mindset means that an owner moves from concentrating on income generation to maximizing the value of their business. A business can generate healthy margins but still be untransferable. It is only through an owner working through business and personal readiness that they can create a truly transferrable business.

Contingency planning is important for all business owners due to the potential impact of the 5Ds. For businesses with multiple shareholders, a prudently worded buy-sell agreement is a must to deal with both unanticipated and anticipated exits. Similar to how updating a business valuation regularly is important, so too is reviewing and updating the shareholder buy-sell agreement. In the survey, of businesses with multiple owners, 87% had a buy-sell agreement and 80% were funded through life insurance. The funding of the buy-sell through insurance is critical because an unanticipated event may require a shareholder to be bought out and without insurance, this event may ultimately result in the liquidation of the business.

This survey was noteworthy as most respondents felt “exit-ready” and a large majority had prepared some degree of written plans in the areas of exit planning, personal financial plans, and personal readiness planning. It was also unique in that owners were largely considering internal exits (management buy-outs, transfers to employees, family transitions, and ESOPs) compared to earlier surveys where third party exits were more commonly desired.

Transition teams are important to owners to provide advice and guidance during a transition period. Numerous persons can fill that role including family such as spouses, parents or children. In this survey, 78% of respondents said they had a transition team. When asked who comprised the team, the top three answers were attorneys, financial advisors, and an insurance professional. Scoring lower than expected were CPAs, spouses, M&A advisors, and commercial bankers. This is somewhat surprising compared to previous surveys where CPAs and spouses usually score higher. Additionally, both M&A advisors and commercial bankers can play a critical role in transitioning your business as smoothly as possible. Particularly, the latter has a strong grasp of your business and so should be relied upon more than has historically been done.

The 2021 State of Owner Readiness Survey conducted in the NYC area illuminated a few key differences between previous surveys. Some of these differences may be more geographical in nature (that is, traits more specific to NYC area businesses) but also may be indicative of shifts in owner intentions as education around exit planning becomes more common place amongst both Baby Boomer and Gen X owners. Overall, some of the key differences from previous reports can be summarized as follows:

Despite the overall greater awareness of exit planning issues amongst owners, there were still some areas for improvement. Notably, areas of weakness included tax planning, estate planning, and developing a written, detailed action plan. The latter is important because it provides the engine to realize the goals and objectives the owner has previously laid out.

As always, exit planning is a complex affair but it starts first with owner education, then owner commitment, and finally through committed action. Start the conversation today and give us a call or book an appointment.